Museum tickets, service costs:
The Mayor Dr. Emil Rotschnek, a pharmacist donated to the Free Royal City of Debrecen Museum the equipment and installations of the former Golden Unicorn Pharmacy. 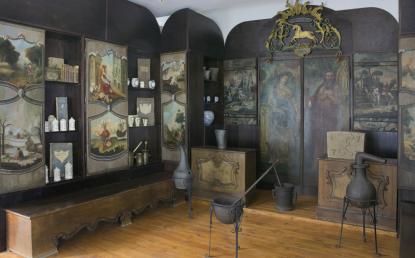 The pharmacy was located at 3 Czegléd Street by Antal Zeininger in 1772, later at Kossuth Street. In 1852 the pharmacy moved to Sas and Kossuth Street corner where there is has been a pharmacy ever since. The pharmacy's equipment and furniture are of the most beautiful ones among Hungarian pharmacies. In some vessels, there are still remnants of the old drugs. The pharmacy's arch shaped sign has the year 1772 engraved and a unicorn.