Museum tickets, service costs:
Our contemporary exhibition introduces the life and culture of the town of Barcs from its beginning until nowadays. First we show the archeological findings rescued in Barcs and the surrounding areas and give an insight into the lives of the people who lived here in times before history. Objects found at the excavations in the largest number were everyday used tools. By the help of the ceramics we may also take a peep into the lives of our ancestors. The ceramics in the showcases prove that their material may last for thousand of years. The period in which they were made in is also educed from their substance. 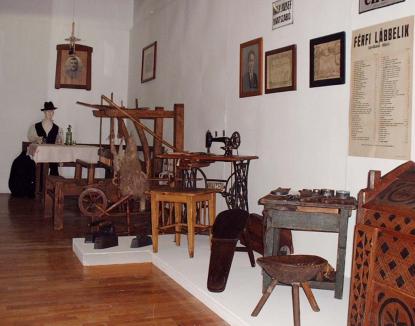 Under the Turkish reign in (1526-1686) there were two turning points in the history of Barcs. The people fled from their town and new ethnic groups arrived. Barcs became a settlement with three nationalities living there. From around the time of the end of the Turkish reign documents were started being written and more and more of them are found nowadays. The Turkish plank castle is the most important place for archeological works. Its excavation is still in process present.

The River Dráva played a weighty role in the life of the town. The fish-fork and the fishing net were substantial parts of the traditional fishing of the area. The tools were kept in fishing chests. The chest of one of the last fisherman of Barcs is presented at the exhibition.

The guilds were the corporations of the different trades, which had a significant scope of authority in the Feudalism. These communities lived according to very strict rules. The leader was the guild master who guarded the symbol of the community: the guild chest, the guild jug, and the statue of the guardian saint of the guild. The show presents the Wanderer Book of János Resetár written in 1840 by the sundry Guild of Barcs. This is the only document that preserved the seal of the guild in red wax.

The weavers and the peasant women all made different kinds of cloths. The textile was ornamented with colored embroidery. The abundance of the ornamentation is due to the different ethnic groups living in our town. Under the revolt against the Turkish the town was nearly emptied. At this time in the 18th century Hungarians, Croatians, and Germans moved in who were followed by Gypsies in the 19th century. Barcs with its motley population has its traditions for three centuries.

At the end of the exhibition we show a little detail of the lives of civic families. We would like to show the significant change, which were brought on by the settling civic society in Barcs. The trade, the railways, the shipping on the River Dráva developed and several important factories were built. The social life was sparkling. The development of the town reached its peak in 1979 when Barcs was officially declared a town.