Museum tickets, service costs:
Through the twofold holy years, the Eucharist and the St. Stephen Memorial Year (900th anniversary of St. Stephen's death) Székesfehérvár was brought into the center of nation-wide attention. The town was about to give such commission to Aba Novák, which would be the peak point in the artistic career of the artist. 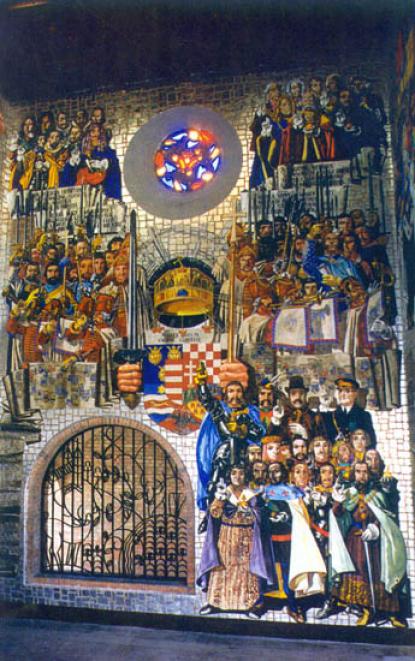 In October 1938 the religion- and education minister proposed for a worthy celebration of the St. Stefan Memorial Year. The preparatory works to be made in the ruin garden was assaigned to Vilmos Aba Novák.

The wall images here are also made in the well known method: events and scenes are condensed into a compact form, some scenes are emphasised, and linking words are used between the various stages.

The events processing the history of the Hungarian crown are enlivened on the Eastern wall. The crown sent by the pope is brought about by angels to the Hunfarians just turned to Christianity. Beside this scene the king is being crowned.

On the Souhern side there stand the portrays of the Hungarian rulers swearing for the crown: Matthias, Mária Terézia, Ferenc József. János Hunyadi, Lajos Kossuth and Miklós Horthy are also on the wall.

On the Northern wall we can see the legend of the holy right and the stories connected to it. The figure kneeling beside the Holy Right is said to be Aba Novák himself. On the upper part of the wall Mária Terézia is welcoming the deputy of the Dalmatian merchants, who give the Holy Right (kept in Raguza for centuries) back to the Hungarian Queen.

The Western wall represents the subject of the pagan Hungarian nation accepting Christianity. The baptism of Vajk is seen. A kneeling monk stretches the sketch of the St. Stephen basilica toward his monarch.

The condition of the wall paintings badly deteriorated over the years. After the second world war the paintings were whitewashed by the government. Thus almost the whole work was destroyed.

The discovering and restoring of the wall image began in 1992 - under the supervision of painter and restorer György Hernádi. Its feastful inauguration and transmission took place on 15th August 1996.