Museum tickets, service costs:
The title of the exhibition has several meanings: the name of the poet, Sándor Petőfi, is the synonym of 'Hungarian poet' not only in Hungary but also all over the world. It was necessary to open a permanent exhibition in the National Literal Museum, which also bares the name of the poet. 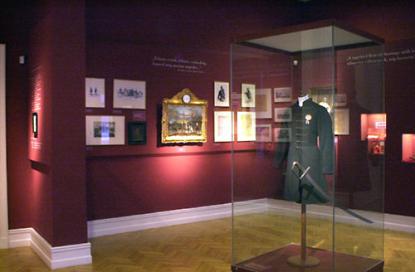 Since the cult of Petőfi began in the lifetime of the poet, his heritage of objects and literal works is outstanding. Our exhibition is not based on ideology. It does not strive to present or discuss truth of literal history but wishes to show the spiritual and material surroundings of the poet. We present the original relics, pictures made of him, and all his volumes published at his lifetime. We may also wander at the land of Hungary in the Reformation Age, in Pest-Buda, and learn of the developing civic life of the country.

We may walk around the marble tables of the famous Pilvax Cafe, or peep into the home of Sándor Petőfi and Júlia Szendrei. We may learn of the family, the friends, or readings of the poet or take part in the events preceding the revolution of 1848, and the political struggles of the Republican poet. The officer might have disappeared after the Battle of Fehéregyház on 31, July 1848, but his words and poems could not disappear from the minds of the people in the past century and a half. His poems were published in more than a hundred volumes and in more than fifty languages. In the fourth ward artworks of fine art evoking the memoir and creating the myth of the death of the poet can be seen.