Museum tickets, service costs:
Our exhibition presents the significant themes of the ornamentals of Somogy County. The material is taken form a collection assembled from the beginning of the 20th century. 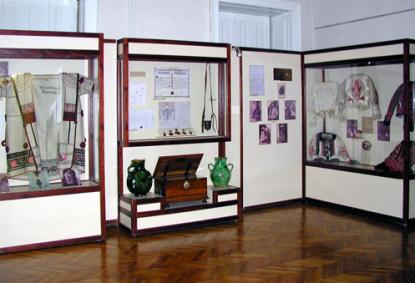 The first ward is the location of wooden carved objects and equipment of shepherds and peasants. The traditions of the so-called 'betyár', the outlaws are also presented in this ward. In the second ward, the nicest pieces of guilds of the tailors, furriers, and dyers, who mainly worked for the peasants and shepherds can be seen. The cotton-cloths making was a very important feature of the area, especially in Szelic and in the villages in inner Somogy. Cotton-clothing was favored until the beginning of the 20th century. The third ward presents the differences in the ornamentals according to their regions of their making. We can see simple hemp textile as well as ornamented buns worn in the villages made by specialists.

Among the festive clothing, we can see that from Csurgónagymarton, Törökkoppány, Karád, Szenna, Lakócsa, and Szulok. In the fourth ward, the visitors may study the differences in the color of the mourning textiles and clothing. The reason we present these is the fact that the white mourning cloth was preserved in the tradition of the population of Zselic and Somogy until the beginning of the 20th century.