Museum tickets, service costs:
The first thematic group of the material of our exhibition include the representation of the art of miners. Sándor Gáspár, painter was the artist representing mining topics of the last decades. His large sized artwork titled 'The Exploration of the Coal of Dorog' is the first painting the visitors meet when entering the museum. It is the opening picture of the series of pictures introducing the history of mining in Dorog. 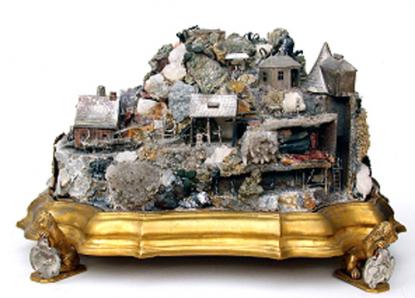 Géza Kukán worked in the first third of the 20th century. He also did many paintings on the topic of mining. The one titled 'In a Caved Mine' (1921) was awarded the prize of the capitol. Besides this one two other paintings of the artist can be seen at the exhibition.

Entering the ward, the visitors may see the so-called 'Mine Mountain' made in the 1750's by an anonymous artist in Körmöcbánya. It was made of thirty different minerals; the figures were made of silver. This excellent work of goldsmithery presents the mining techniques and the methods of mining with scientific punctuality.

The most valuable of the exhibited works of applied art is the Esterházy Chalice, which was given to Ferdinand III by the Town of Selmecbánya on 17, July, 1650. On the base that pictures a cliff there are miners working in three mines while the stem of the glass is shaped as a mining tunnel.

The gilded copper and the vessels are connected to Úrvölgy in Besztercebánya. In the 1600's the workers of that area noticed that the iron tools left in the water turned to copper after a while. They used these mysterious tools to make cups and chalices which they covered partly by gold. Most of these vessels have inscriptions, sometimes poems carved in them.

The miner chopper was given to Gábor Svaizer, one of the biggest and most effective leader of the Hungarian ore mining, by Ferdinand V in 1839. At the end of the chopper a parade, on its surface a pit, a horse car, and miners working in the mines can be seen.

The patience glasses are interesting parts of the showing. They introduce the mining in Hungary in the 18-19th centuries through their many layers. On the lower levels the miners working deeper in the mines, their simple machines and tools are pictured; on the higher levels the joy of the every day life or the dark scenes of the lives of the figures are presented.

Árpád Feszty's large work titled 'Mining Accident' is a characteristic piece of the Hungarian painting of the 19th century. Feszty painted the tragic events he saw at the entrance of the mine of Koltó, Kereszthegy in 1885.