Museum tickets, service costs:
The renowned exhibition entitled 'Homage to Thalia' reviews the two-century history of the theatre in Miskolc. 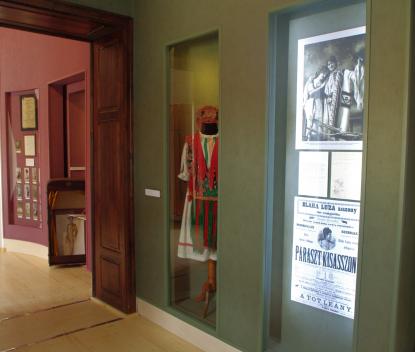 The first section evokes the beginning of acting in Miskolc: a number of outstanding theatre people visited Miskolc in the 19th century. The marble statues at the arch entrance commemorate them.

The exhibition rooms upstairs present the operation of the second theatre in Miskolc first opened in 1857. The first smaller room remembers the most important actors who were there at the opening show: Mrs. Jókai Róza Laborfalvi, Gábor Egressy, and György Telepy. The visitors will also learn about the design of the tower clock and the designs for the reconstruction works in 1925.

The next smaller room reviews theatre history in Miskolc via presenting the directors of the institute in the 20th century, including Lajos Palágyi, the Sebestyén Brothers, Géza Földessy etc. The room also deals with the Latabár family who also began their career in Miskolc. Many other famous actors also began their careers in town: archive films remember some of the great moments of acting with actors like Tivadar Bilicsi, Ferenc Bessenyei etc.

The biggest unit deals with those fifty years when the theatre was operated as a state institute. The room was fashioned to look like a stage. Documents, photos, posters, personal belongings, as well as theatre related objects are shown in this room.

But it is not only the history of the theatre that is important but also the personal history of the actors. Éva Ruttkai and Zoltán Latinovits first met in Miskolc. They and other artists including Vera Márffy, István Ábrahám, Tibor Fehér are remembered in this room. The last unit reviews the history of amateur theatre. A corner was set up for children to have fun, with puppets, dress ups and paints.