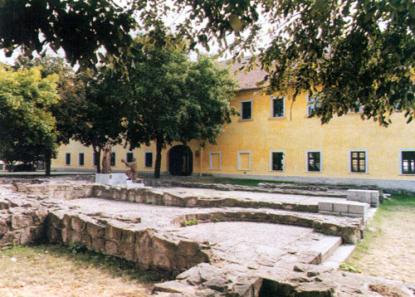 The monastery joined the church in a U shape, which was built according to the style of the German Romanian age.

King Béla III. established a cistercian abbey in Pásztón in 1190. The cistercians took the buildings of the former benedictine abbey and in the first third of the 13th century they extended and reconstructed the sanctuary of the church.

In 1526 the monks of Pásztó fleed because of the news of the battle at Mohács. The abandoned building was reinforced by the king, but it still did not gain a serious strategical significance. The royal soldiery did not even try to defend themselves. As an approach of the Turkish army in 1551 they put the castle to fire and ran away. Most part of the town was damaged by the fire.

The monastery buildings stood forlornly and ruinously in the 17th century. However, in 1702 cistercian people from Weelehrad resettled in the town. Between 1715 and 1718 the baroque monastery building was built. It gained its current feature during the reconstruction works made between 1987 and 1989, when it was transfered into a museum.