Museum tickets, service costs:
The ward presents the art of János Halápy (1883-1960) through presenting 23 of his paintings. The exhibition opened in 1989 created of the donations of the widow of the artist, Lili Halápy. 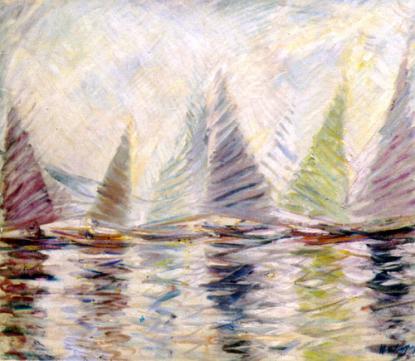 The painter was born in Pórszombat in Zala County. He attended training-collage when his talent was discovered. Later, in 1910 he won the golden medal at an international drawing exhibition in Paris. This was the time when he turned towards painting. He joined the modern impressionists and cubists in his art. Throughout his stay in Paris (1925-28), he found his own style and way of expression. The first three pictures show this period.

From the 1930's he spent the summers in Balatonfüred. He painted portraits, but his favorite topic were the Lake Balaton and the flower still life.
The Mediterranean-like surroundings of the lake, the water, and air appeared in varied lighting and colors in his pictures. His unique technique was to place lines and spots next to each other. It is not a surprise that Halápy was known as the painter of the 'Balaton of thousand faces'.