Museum tickets, service costs:
Jakab Pásztói - in a testament dated in 1428 - left a horse to the magister of the local school. So the school master was first mentioned in this testament. His house was reconstructed many times during the centuries. The choir-master teaching and his family lived here up to 1968. In the 1970-ies it was judged to be pulled down, but its gothic windows raised the interest of the experts and as such it was brought under governmental protection. 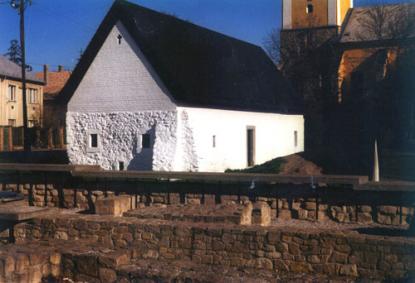 The schoolmaster's house was built of stone. It is a unique transition between the farmhouses and the noble court houses.

The building has three divisions: the portal leads ibto the kitchen, and the room opening to the North was served as a lard. Herein there were three pieces of grain container dug into the floor. These holes proved a real archaeological sensation, for almost the whole scale of th 15-16th century housekeeping instruments were discovered in hem. Possibly the news of the Turkish approach (1551) made the school master to flee and carefully hide his values in the holes.

In the second half of the 16th century new tenants moved into the house and restored the burned building. They had not discovered the holes, so they remained hidden until 1978.