Museum tickets, service costs:
The permanent exhibition of the museum that you can find in the first three rooms and the studio provides a nice cross-section of the painterly part of the oeuvre. Each period is represented with an important art piece. In the present review we mention but a few. 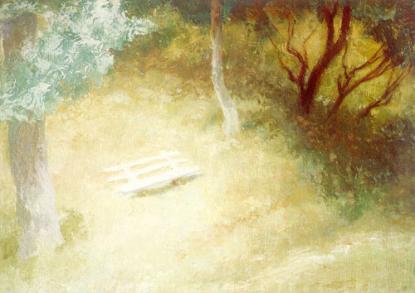 The atmosphere of the corner-room is determined by an old, rare and nicely shaped musical instrument, the so-called giraffe-piano. "Morning", from 1946, hanging above the bed, was painted in the mature characteristic Szőnyi-style. The artist always placed female figures undressing, making the bed or combing into a familiar setting. In spite of their intimate gestures and fine sensitive formation they are monumental and dignified.

The one-time milieu can be best experienced in the living room. The bookcases and the furniture still preserve the memory of the Szőnyi family. One of Szőnyi’s main works, "Garden Bench" from 1943 seems to illuminate its setting. This painting has been analysed by many a people in many a ways but István Genthon's evaluation appears to be the most proper as it refers not only to the picture itself but also to Szőnyi's whole art: "In the corner of the garden there is a white bench surrounded by trees in leaf in the sunshine.

It looks like any other bench, the artist did not put any monsters or demons around it; he did not mean to compete with Hieronymus Bosch's nightmares. However, the importance of this bench has grown in frightening measure. It is more than just a protagonist; it is the only thing present in the picture."

The prevailing tone of "the Hungarian room" comes from the beautiful set of more than a hundred-year-old folk furniture from the Great Plain. The furnishing surprisingly well corresponds with the early oil paintings on the walls.

Upstairs you can find perhaps the most interesting part of the museum. Szőnyi could hardly use the large and light studio. His library of books on fine arts as well as his easel with a tempera study can be seen there. The large-size main works in the studio reflect the course of a rich career from the mid-1920s until the painter's death. Clearly can the way be seen from "Self-portrait" of 1928 or "Evening" of a fascinating tone to the vision-like lyrical interpretation of Zebegény bathing in the autumn sunshine in one of his last pictures titled "Village in Autumn".

The furniture of the studio, the objects, the palettes, the brushes, the paints, the tools and the easel all bear the master's mark upon them. You can imagine that the master has just stepped out in his beloved garden for a few minutes and will be returning soon.