Museum tickets, service costs:
János Thorma was born in Kiskunhalas on 24, April, 1870. His gentry family lost all their lands which caused them to lead their lives as a civic family. The children of the Thorma family were raised in the spirit of the Revolution of 1848 which meant loyalty to their country. When Thorma was taken to the school of the Minorites in Nagybánya the stories he had heard in his childhood turned real historic knowledge. 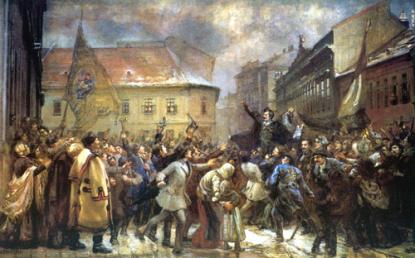 At the beginning of his career Thorma lived in Pest and was the student of Bertalan Székely. He then moved to the capital of Bayern, Munich. There he joined the circle of Simon Hollósy. It was this school where Thorma learned of the new artistic notions of the time.

At the turn of the century Thorma and Réti, two students of Hollósy, persuaded him to move to Nagybánya where the colony of painters was born. After Hollósy left in 1902, Károly ferenczy, István Réti, Béla Grünwald, and János Thorma became the leaders of the free school of school of painters of Nagybánya.

The sensation in the social life of the colony occurred when the lonely sixty year old Thorma married his ex-student and relative, Margit Kiss, in September, 1929. He also endeavored to hold his first individual exhibition around this time, in the Fall of 1931.

The changes brought bitter experience to Thorma. Among the founders of the free school he was the one who was devoted to historic romanticism. He believed, and later he wanted to believe, that the artwork made in the studio can be compared to those made in nature. His heroic historic composition, the 'Hungarians Wake Up!' was being painted in a hopeless fight for quarter of a century until the time of his death.

In his last period, except for the time he spent on his major work, he turned away from dramatic topics. His art had an epic, later lyrical undertone. He painted his pictures with topics of compositions, (Violet Collectors, Mayday, and scenes of mythology), portraits, nudes, and several landscapes. He often rode a little horse carriage out to the lands around Nagybánya to paint. On one of these occasions death reached him in 1937.