Museum tickets, service costs:
The works of Lamazares capture the most traditional paintings. The material making the picture is not hidden: the wooden stand, the paper and the nails appear as the topic of the work. He formulates a suggestive thesis in his works: he lets anybody who approaches a picture find whatever can make the world for her or him. 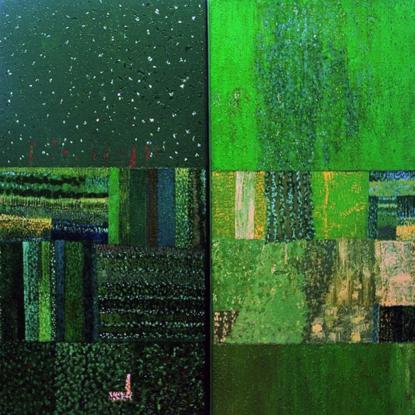 'I paint because my hands need to see dreams and dance them. I honestly believe that there are many of us who need dreams. I paint for them and not for myself.' - says the 54-year-old artist who is one of the most significant representative of Spanish painting.

The exhibition presents 20 pictures made with mixed technique selected by the curator Javier Sanz Fuentes. The pictures were made from 1983 to 2003.

Antón Lamazares was born in 1954 in Lalín, Galícia, Spain. He made friends with painters like Laxeiro and Manuel Pesqueira who greatly influenced him. The painters Alfonso Fraile and Santiago Armón and the poet Carlos Oroza belonged to their circle. He studied the works of Vincent van Gogh, Paul Klee and Joan Miró on his trips to the United Kingdom, Holland and France. At the end of the eighties he traveled to Istanbul where the Greek Catholic churches effected him greatly. His experience with the Greek iconography was basic in his next artistic cycle when wood became main means of his art.

We would like our visitors to be able to peep inside contemporary Spanish art.

The first showing of the works of Antón Lamazares was realized by the Spanish organization Seacex and the Kiscell Museum.