Museum tickets, service costs:
He was born in Székesfehérvár in 1955 and completed his studies in printmaking at the Hungarian Academy (now University) of Fine Arts between 1975 and 1982. After the change in the politician system in Hungary he was the main organiser of the Hungarian art festival called Velence (Hungarian town, eponymous with Venice, Italy) Biennale. He started teaching at the Hungarian Academy of Fine Arts in 1990. He completed his DLA in 2000, and his Habilitation in 2002, in which year he was also appointed head of the institution’s Department of Anatomy, Geometry and Drawing. He was the rector of the Hungarian University of Fine Arts from 2005 to 2013. He received the Mihály Munkácsy Award in 1998, as well as the Special Award of the Hungarian Ministry of Culture and the Special Award of the President of Hungary in 2002. 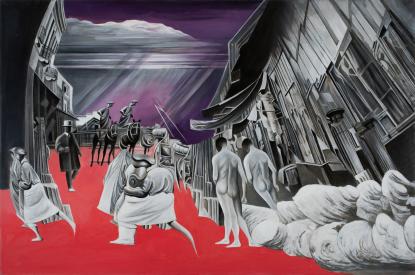 He pursues a diverse set of activities on the Hungarian cultural scene but primarily produces figurative paintings and graphic sheets, mostly in large cycles, treating, among others, the theme of childhood, while he also realised a portrait gallery of literary figures, along with series depicting bathers, bunkers and columns. He organised his most recent series around Ungern-Sternberg khan (Roman von Ungern-Sternberg) and the portrait of a woman (“AB”).

Revisiting the 19th- and 20th-century tradition of cycloramas, he implemented the Kőnig Cyclorama in collaboration with other artists in 1991, while he painted a mural for the Saint Stephen Cathedral of Székesfehérvár in 2022.

Besides his autonomous artistic pursuits, he also explores the borderline area between art and science. He has been working on his graphic reconstruction project of Hungarian castles since the 1970s. He is the author of illustrated publications on subjects of the natural sciences, books on castles, anatomy for artists, and anatomical deformations, while devoting further volumes to the study of spatial analysis in art and the possibilities of composition.