Museum tickets, service costs:
Back to the Past on Two Wheels As part of the project 'The Memory of Object, our 120-year-old institution was expanded by a new unit this year. We set up a Spectacle Collection in the basement of the museum, which with respect of the genre in is partly novelty, partly, however, is a return to the era when the founder of the museum, Wosinsky, lived whose first exhibitions could also be described as warehouse-like presentation. Of course, our modern age offers new opportunities that we could not leave unused. Visitors today are aided with a computer database in the orientation, which include not only photographs of the more than 6,000 works of art exhibited but detailed description and a number of other information as well. 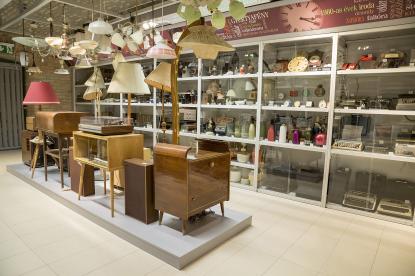 We invite the visitors to a visual time travel, during which we are moving back in time departing from typical modern 20th century objects finally arriving to the Bronze Age. Our goal is to raise awareness of the unique culture of the people living in this region, pointing out that before mass production, unique arts and crafts products items served weekdays and holidays of people in this region.

The historic collection of the spectacle collection is arranged around four thematic aims. In the first room characteristic objects of the technological advances and lifestyle changes are dealt with, characterized by the transformation that was caused by the dramatic development of science and technology at the end of the 19th century.

Tolna County is a country rich in craft traditions and folk art values. Our Spectacle Collection presents in a short but significant section of craft industry history. In selecting the objects we tried to show not only the items of historical significance, but also the folk and applied works of art due to their unique and special regional value that are the most beautiful pieces of our collection, thanks to their beauty and design.<br

In three rooms of the Spectacle Collection we show finds from four eras.

Of the Medieval period the Ete material is highlighted first. Of the finds unearthed during the archaeological excavations we find a selection of 15th to 20th century material of locally produced and imported articles.

During the middle period of the Migration Period the Avars dominated the Carpathian Basin. During the archaeological exploration of the motorway M6 a previously unknown graves cemetery with 1644 graves explored in the suburbs of Szekszárd. The graveyard originally had about 2,500 graves. Its strong military character is shown by arrow fragments, adzes, swords and sabers, and 72 horse graves as well. We selected three types of finds from the sight in Szekszárd.

A significant number of Roman artefacts was relocate in the museum during the first decades after the founding of the museum even though we do not know their exact location of discovery.

Due to significant exploration Bronze Age finds at sites near Bonyhád in Hungary, it is presented in its entirety.