Museum tickets, service costs:
The tragic outcome of the war was not conducive to any memorials, which, apart from representing power, served merely as plots for military parades.Â Both military and municipal leadership admitted that more serious problems had to be solved, namely the care for war widows and orphans.Â The plan of the memorial re-emerged only in 1924, when the installation of war-memorials was ordered by an Interior Ministry regulation. 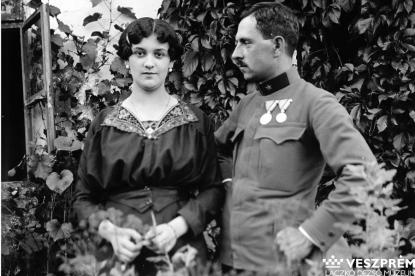 A movement aiming the worthy commemoration of the fallen soldiers started in VeszprÃĐm, too.Â A special amount was earmarked from the city budget again, which was expected to be supplemented by public donations. In 1925 a committee was established, chaired by the mayor. Due to efficient organization accompanied by a successful campaign consisting of charity concerts, theatre performances and motion picture shows, the memorial fund was growing rather rapidly.Â When there was a considerable amount of money available, the memorial-installation process was initiated. 35 thousand pengos had been collected by 1932, but to no avail, because the economic crisis broke out meanwhile. The municipal government decided to transfer 15 thousand pengos to the famine funds.

The public agreed to it and approved the statement by the Minister of Interior: âWe have to care for the living [âĶ] and of 20 thousand pengos the town can set up a worthy statue for its heroesâ memory.â