World War 1 was still going on when it was ordered that each municipality should set up a monument for the fallen ones. 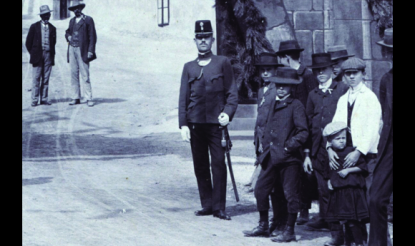 Cherishing the memory of the heroic dead was the intention of the military leadership, but civilians and the municipalities were of a slightly different opinion. While the former wanted to erect impressing monuments as appropriate sites for monstrous military parades, the latter focused on the representation of the victims’ human dignity and community values. Similar ambiguities arose at the birth of the Heroes Gate.

Originally, the monument would have been dedicated to the 31th Royal Hungarian Infantry Regiment and the 7th Royal Hungarian Artillery Regiment. It would have stood in the spacious Búzapiac (‘Grainmarket’) Square, as it seemed to be an ideal scene for spectacular military parades. (The square has disappeared by now. It used to be in the present-day ’Hotel area’, which is a densely populated part of the town nowadays.) The city council voted for the contribution to the budget, and the gypsum model of the future monument, along with the plans made by the architects from Pozsony (Pressburg / Bratislava, Slovakia), was exhibited in the town hall. Nevertheless, the plan did not win unanimous success, and due to the prolonging war, the costs were not available finally. The war memorial remained a mere plan.