MUSEUM.HU » Heroes » Exhibitions » Sites of Memory
Event calendar
2023. January
Heroes - Veszprém
Sites of Memory
The Memory of Sites
architecture, history, permanent exhibition
Share it, if you like it:

During the period between the mid-1930s until the beginning of the 1940s, at the time when the Heroes’ Gate was built, several monuments and buildings were constructed with the intention of evoking the past. For example, the viaduct named of Saint Stephen and demonstrating the latest technical achievements of its age, which has later become the emblem of Veszprém. The construction of the so-called ’Margaret Church’, which was dedicated to Saint Margaret of Hungary, started in these years, too. Apart from building the new church, the ruins of the medieval convent (the so-called ’Margaret-ruins’), where the saintly princess had been brought up, were also renovated. The monument of Steven I, the Holy king, and his wife, Blessed Gisella, was erected in those years on the top of the Castle Hill. The sculptures of the saintly couple have been dominating the view from there ever since. Finally, at the entrance of the Castle Hill the Heroes’ Gate has been set up to commemorate not only the victims of the First World War but all the patriots who had ever fought here before. 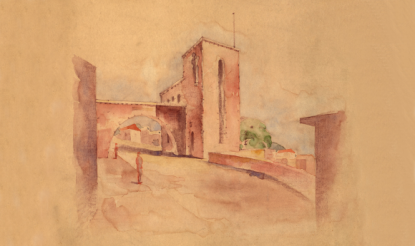 Looking around on the top of the Castle or Benedek (that is Saint Benedict) Hill we can see the contours of the BakonyMountains on the north. Turning eastward, the slightly disproportionate building of the Margaret Church is standing out, while, opposite to the church, the arches of the modernistic viaduct are stretching. Underneath, the districts of the former ‘Queens’ town’ are spreading at the foot of the hill, each of them is hiding its own legends and histories.
In the space permeated by the variegated meanings of past times, the Heroes’ Gate acquires a new role, that is the sign of memory. On the one hand, it is a gate of bygone times. By creating an illusion as if it has been standing there since the Middle Ages, it preserves the memories of the all-time defenders of the castle. On the other hand, the gate is an integral part of the recent past, since we know that it has been set up as a war memorial in the first half of the 20th century.

The gate and its environment have been created with the unconcealed intention of projecting historical dimensions on each other. Our exhibition presents the Gate itself along with the memories that the Gate evolves.

The Heroes’ Gate serves as the entrance to the medieval and baroque plots of the town, at the same time it is the passageway to the virtual words of these plots. Since these plots are attributed with meanings, they constitute particular and unique Sites or ‘lieux’, as the French Historian Pierre Nora puts it. Opposite to sites, which are ordinary and thus could be anywhere as such, Sites can be nowhere else but right here. The Site here is the one, from where the visitors of Veszprém wish to take on a souvenir-memory. And, this Site here is the one that natives (or locals slowly becoming natives) wish to inhabit as their own hometown.

Through the Gate Veszprém seems to be a unique Site, or at least a plot that is rather far from ‘non-Sites’. Our exhibition re-animates the faded meanings and intensifies the impression of the Site.