Museum tickets, service costs:
D. Ákos Hamza became familiar with Cubism and Constructivism at Hungarian College of Fine Arts where he was taught by a broadminded teacher, István Csók. 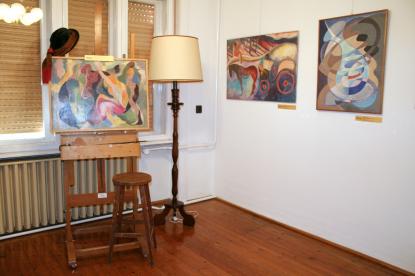 He was affected by French painters (he studied under a scolarship in Paris from 1927 to 1938), first the group called "Nabis", then the dreamlike Surrealism by Chagall. His pictures imply some sort of domesticate Expressive shaping and some dreamlike Surrealist attitude. His main themes were the unique ornamentation of the town, the surrounding landscapes and groups of women. He laid more and more emphasis on the inner structures of forms and the Constructive shaping of images, though he never gave up natural motifs.

He lived in France, Italy and Brazil between 1949 and 1989, then went on with the mission of the Avant-garde painters.

His artistic and human behaviour was featured by calm contemplation, meditation and subjects devoid of politics.