Museum tickets, service costs:
The North-Hungarian Village Region was ceremoniously opened on 25 June 2010. It is to deal with the traditional architecture and lifestyle in the Ipoly and Bodrog Interfluve area. The setting consists of 12 houses and 26 outbuildings, with 5000 original artefacts. 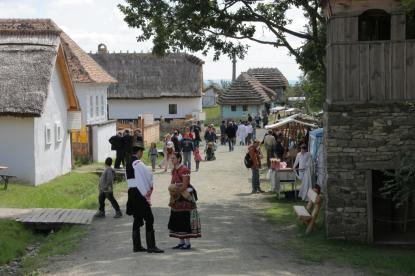 It is the first time that the Open Air Ethnographic Museum chooses a building to put into an existing region from across the borders, From Slovakia. The building complex is located at the edge of the town, with a granary, the servants' home and a green house. By the end of the museum village, a set of cave homes is to be found. Several blood-related families live together in one yard, which is represented by a Palóc lot. Between the narrow lots, a dirt road leads up to the garden where two barns are set up side by side. The other end of the main road is to lead to a set of houses, where an irregularly shaped lot at the end.

The people living in the greatest number in the region were the Palóc, but many other nationalities occupied the region: Germans, Russians and Slovaks. With respect to religion, there was a great similarity in North-Hungary: most people were Roman Catholic, but there were also Calvinists and Greek Catholic as well. Consequently, we set up a Roman Catholic columbine from Debercsény, a Roman Catholic chapel from Kisgömör and a Greek Catholic road cross carved of stone from Regéc.

In addition to various the items peasants in the region used to employ, we also show how squires, travelling tradesmen, seasonal labourers from the Great Planes and the Transdanubian area and local peasants used to live.

A new feature of the set is our display of a photo collection of people who used to live in the region. We also opened a movie theatre where films about local life are screened. The squire is house to deal with part of the history of Upper Hungary. And if you are interested in how we work at the Open Air Ethnographic Museum, find the half glass building in Erdőhorváti where secrets of our work can be found out.