Museum tickets, service costs:
The main line of the exhibition is the chronology of museum history, thus the visitors may see the objects of archeology, ethnography, history and numismatics according to this. 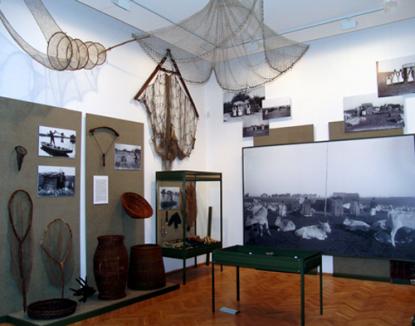 Among the objects of archeology, the visitors may see the Urn Cemetery excavated in Vatya by Kada Elek, The Avar Cemetery of Gátér, the findings at the Sarmata Settlement in Kecskemét-máriaváros and the objects from the time of the Original Settlement found in Dunavecse-fehéregyház. Of the findings of Szabó Kálmán's in Tiszaug we show Sarmatian and Avar jewelry and ornamentations.

The Earth Fortress of Alpár represents the excavations of the past years from the Bronze Age, the Sarmatian settlements and cemeteries around Kecskemét. The findings of the rich Avar cemeteries are shown in a separate showcase.

We show vernacular and civic kitchens, viniculture, farming, fishing, the life of shepherds in pictures and objects as well. We present the vernacular clothing of the Area between the Rivers Danube and Tisza as well as beautiful ceramics.

The compilation titled 'From the Objects of Life Style' include products made in Kecskemét, objects used on holidays and weekdays, cloths and pictures taken by photographers of the town.