Museum tickets, service costs:
The Asian origin Avar and people who had joined them settled in the Carpathian Basin in 568. They were financially supported via gold taxes they received from Byzantium to keep peace. 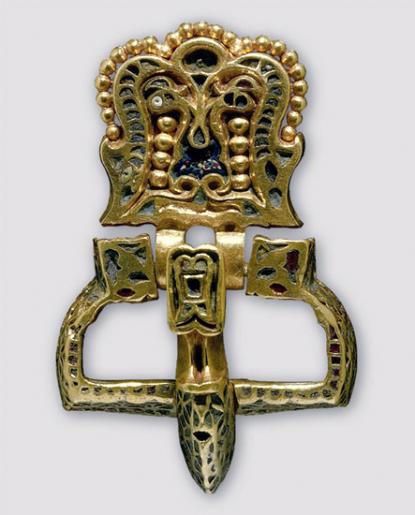 The man buried around 670 in the outskirts of present Kunszentmiklós Kunbábony belonged to the most prestigious leaders of the Avar or was the 'Kagán' himself.

We do not know much of the burial rituals that had been developed for centuries. We surely know that the Avar nobleman was buried in a 280 cm long, 130 cm wide coffin ornamented with golden plates. The grave was situated Northwest-southeast. The symbols of his power, weapons, pots and tools were buried alongside of him. His shroud was ornamented with gold plates. Gloves with gold for nails and rings decorated his hands. Flesh of two sheep was placed next to the deceased with a giant cup, probably with wine, was placed next to his head.

The rank of the man found in the grave near Kunbábony was not only shown in his ornamented belt but also his horn, cup, mace with the head of a bird, as well as his sword ornamented with gold. We can decipher his social status based on the finds.

Unfortunately, the finds taken from the excavation of Alvira H. Tóth and Attila Horváth are incomplete since locals took a number of objects away. 155 objects were taken to the museum weighing 2.5 kg. The grave found in Kunbábony is still the nicest Avar find. It has been shown in several countries in Europe.

The exhibition was organized by Erika Wicker.