Museum tickets, service costs:
"Kálmán Mikszáth was born on 16th January 1847, Szklabonya (Mikszáthfalva)and died on 28th May 1910 in Budapest. After his legal studies made in Debrecen he became a clerk in Balassagyarmat. His writings were first published in 1869. Since 1873 he had been working as a journalist in Budapest. After two years of married life he divorced his wife in 1875, but later marriad her again. He worked for several papers, such as the Szeged Diary, Pest News, etc. The short stories of Tót brothers (1881) and Good Palóc people (1882) brought success and the finances to him." (Hungarian Encyklopedia, vol. 12) 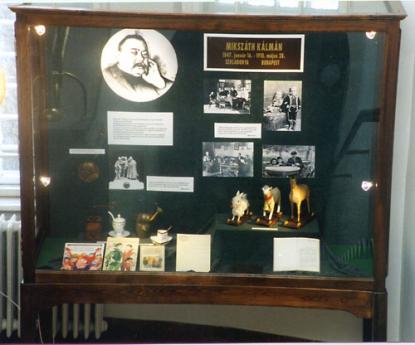 "The name of Kálmán Mikszáth is strongly connected to the Palóc land.
Mikszáth has never left his native land. He was strongly maintaining his roots.
His literary success can be put down to the people of his land. The source of his life work can be found among the hills and highlands of his home land.
Beside the mother land the family was the principal source of upholding strength to him as a private person and as an artist."