Museum tickets, service costs:
In 1977 Miklós Melocco was asked by Ágnes W. Somogyi of the Petőfi Literal Museum to design a statue of Ady at the 100th anniversary of the death of the poet. The monumental composition of several figures made of gypsum was ready in November 1977. It was placed in the ward next to the Lotz-ward of the Károlyi Palace on the occasion of the opening of the fine art exhibition titled 'Ady-Picture'. 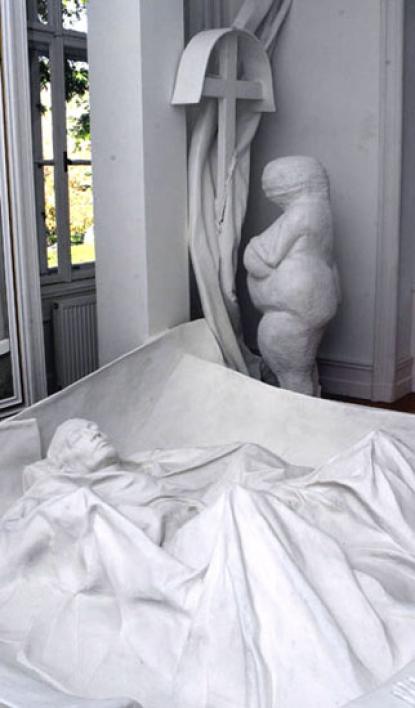 'The artist was inspired by the occasion and the location instead of creating a simple memorial statue when composing the work, which he has been interested in for decades. The fine elegance, the repressed pomp of the Palace built in Classicist style, more precisely the ward with its small space, which is enriched by the mirrors on its walls that converse with each other, create the illusion of immortality. This frame is excellent to fulfill the idea of the sculpture.

Under one of the mirrors, we may see Ady in the peace of his death. In front of the window to the right of the mirror, there is a headstone. Next to it stands the life size figure of the Venus of Willendorf. On the ceiling from the window to the mirror on the other side over the poet who is laying on the catafalque, the drapery flies with lively richness and solemnity. The divine arm that colligates the clouds as the symbols of divine power organizes these images. A tiny figure holds on to the arm who reaches the heights with the twirling multitude. The cloud that is moving towards the window hides an enlarged figure of a man, one of the condemned. In front of the catafalque, a man kneels with stretched arms. He is not mourning but disengaged. He happily celebrates and welcomes the new soul in infinity.

In the background, in the shadow of the drapery clouds in front of the other mirror separate from the main scene four civilians converse leaning over the table. They pay no attention to the world surrounding them; they do not even notice the half-naked mythological figure. Are they us? Are they the lavish blind? In the meantime, the mirrors multiply the scene making the visitors relive this sacred and at the same time profane scene. The visitors become part of the scene just as the audience of Bernini's 'The Vision of Saint Teresa' in Rome become part of the wonder. They become part of a wonderful apotheosis of a kind of mission'.
(Péter Kovács: Miklós Melocco 'The Altar of Ady', Lajos Németh Album, ELTE, 1989.)