Szentes was a county town at the beginning of the 20th century. In 1930, more than one third of its population lived in homestead. The homesteads of Szentes were open-air type farming estates. 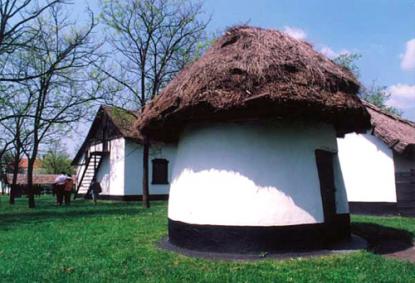 The walls of the buildings were made of loam, their roof of reed. Its chimney in the kitchen was open until the first decade of the 20th century, and then they were covered. Between WWI and WWII, eaves were built of planks in front of the house.

At the back wall of the kitchen the arch is untouched; the vaults were typical in many houses of the Great Planes. The family had its meal at the table in front of the vault. Behind the door, a bench was placed with pottery jugs on it. The room opened on the left.

Among the important furniture of the chamber, we can mention the bench made in 1911, which was called cupboard. In the near past leftover and jug full of milk was kept in it so the cat did not reach it. The old element of the chamber was the 'téka' on the unused windowsill.
A shed was attached to the end of the house where, iron harrow, and smaller tools were kept beside the car the plow.
About 8 -10 acres land belonged to the homestead. It was a smaller peasant estate. Its characteristic building was the sty where pigs and hen were kept.