Museum tickets, service costs:
Bakony evokes hills covered with woods, while Balaton-Uplands recall gentle slopes rising above the glistening water and interesting volcanic shapes planted with grapes and press-houses. In the villages whitewashed, adorned gables, vaulted porches catches the eyes of the visitors together with colourful stone walls emerging from beneath the crumbling mortar. 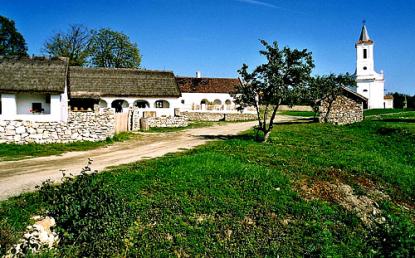 Till the mountainous regions of historic Zala and Veszprém Counties were covered with unbroken leafy woods, the houses were mainly constructed with wooden and wattle-and-daub walls. Parallel to the thinning out of woods, stone became the most significant material during the 18th century. The walls built from white, yellow and grey limestone, dolomite, red sandstone and black basalt give a peculiar character to the villages. Serfs and cotters used quarry stone put into mud. The new building material affected the structure and form of houses: trough vault, constructed from flat stones and vaulted cellars were made, which enhanced the level of wine storing. The roofing and the ceiling of dwellings with black kitchen and three or four rooms were constructed from trimmed hardwood till the mid -19th century.

In the Balaton-Uplands mainly viniculture and fishing (by the shore), in the Bakony animal husbandry and forest crafts (carving, lime-burning, potash cooking) were the main sources of living. Small amount of grains grew on the poor soil, so the population actively bartered with the inhabitants of the flat country. The wines of the area also reached Western-Hungary and Styria.

Due to sieges of fortresses, most of the villages were destroyed in the 16th-17th centuries. Parallel to this the number of the population also decreased. In the 18th century the new owners called in Hungarian, German and Slovakian settlers. Besides the dominance of church and secular lands, poorer layers of the gentry coloured the society. During the Turkish occupation most of the people converted to Protestantism, however, at the end of the 18th century, Catholics prevailed thanks to settlers, cotters and shepherds. Protestantism was preserved by the descendants of the gentry. In the neighbourhood of Kővágóörs Lutherans also lived.

The settlement patterns were characterised by villages by roads in the Middle Ages. From the 19th century, due to narrow fields, irregular sites and the system of common yards appeared, while in the new villages regular yards were characteristic. The regional unit represents the different kinds of stone architecture with dwellings, public and ecclesiastical buildings.