Museum tickets, service costs:
Artworks for the Fine- and Applied Art Exhibition were selected from the artwork collection of the Gödöllő Town Museum. The permanent exhibition presents artworks owned by the Gödöllő Town Museum made at the colony of artists of Gödöllő awarded with the Hungarian Heritage Prize and a selection from private collections (Nagy Sándor House, Remsey Family) 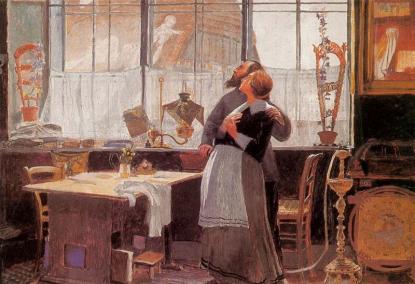 The colony of artists of Gödöllő was the only organized community in Hungarian Secession. It was established around 1901 when Körösfői-Kriesch Aladár moved to Gödöllő. The leaders of the group were Körösfői-Kriesch Aladár, Nagy Sándor, Thoroczkai Wigand Ede who had worked together at national exhibitions and world expos.

In 1904 a weaving workshop opened in town which later became the centre of the colony. The work was done by women and girls from Gödöllő and its region. Carpets designed by members of the colony were begun to be manufactured in 1905. In 1907 the weaving shop, later the school, became classroom of the Collage of Applied Arts, thus it was henceforward supported by the state.

The colony of artists of Gödöllő attracted the largest number of artists and visitors in those years. Then Nagy Sándor lived there with his wife, Kriesch Laura, Belmonte Leo and Juhász Árpád, Zichy István, Frecskay Endre, Raáb Ervin and Mihály Rezső, Sidló Ferenc, Moiret Ödön, Undi (Springholz) Mariska and her sisters, Carla és Jolán, as well as the Frey brothers from Bácska who participated in the design and manufacturing of textile.

Characteristic of the era, the colony of artists of Gödöllő was excellent in all genders. Beside a number of state orders of textile, artists were commissioned to make building ornaments too.

WWI contributed significantly to the disintegration of the colony. However, the last straw was the death of Körösfői-Kriesch Aladár in 1920. This put an end to a two-decade activity of a group involved in the art of secession.