Museum tickets, service costs:
The regional unit presents the traditional vernacular peasant culture of Őrség in Vas County, Göcsej and Hetés in Zala County. The soil is clayey, difficult to cultivate but the area is rich in streams. In the woods oak, beech and pine are indigenous. The settlers founded their first settlements by deforestation through burning up the vegetation on the wooded hilltops. Besides the scattered, loosely connected irregular settlements, in flat areas mainly villages developed arranged by a regular street pattern. 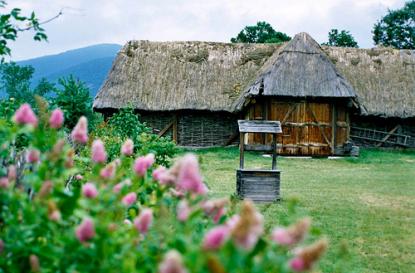 These villages having come into being at the time of the Magyar conquest of Hungary used to belong to our frontier regions up to the Mongol invasion in the 13th century. The frontier guards serving the king stayed in their villages after the destruction of their organisation, too.

Göcsej people rather served as soldiers and waited on at the royal court in exchange for which they were ennobled. The one-time guards living in the 18 villages of Őrség (the area of the defence system) enjoyed privileges which were curtailed only in the 17th century. The people having lived here since the age of the Árpád-Dynasty are the descendants of the late border guards some of whom were raised to nobility, but some of whom sank into serfdom.

In the earliest stages of Reformation the communities here became Protestant. However, in the 18th century serfs were converted back to Catholicism by their landlords but the gentry remained Protestant or Lutheran.

People supplemented their livelihood by gleaning. Mainly rye, barley, millet and buckwheat were grown. Animal husbandry meant nomadic raising of livestock and stabling as well, and in oak-forests swine were fed on mast. Their far-famed cattle were sold mainly in Austrian and German cattle-markets until World War I. The flourishing cattle-raising in the second half of the 19th century led to the quick rising into the middle-class peasant bourgeois stratum of those living a conservative way of life.

The traditional construction material of the region was wood; in areas lacking wood wattle- and earthen-walled buildings were characteristic even at the turn of the 19-20th centuries. On the carved oaken sills hewn and carved pine log walls were built then plastered with mud and whitewashed. They had thatched roof although since the middle of the 19th century tiled roofs also appeared.

The belfry standing in the middle of the regional unit, together with the houses and yards clustering around it invoke the small villages in the flatland of Zala County. The compound on the distant hill conjures up the scattered irregular settlements. Further on, the press-houses of the Zala hills line up.