Museum tickets, service costs:
The two rows of houses facing each other in the regional unit are definitely different: on one side there are stately brick buildings while on the other humble, earthen walled, thatched or reed covered ones can be seen. The exhibition's aim is to reflect the ethnographic versatility of Kisalföld through its traditions and changing. 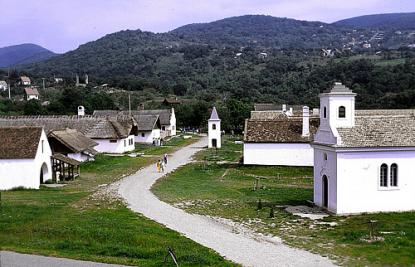 The historic boundaries of the region are outside of Hungary today. Since the 18th century the flat areas of Pozsony, Moson, Nyitra, Komárom, Bars, Győr, and Sopron Counties have been named Kisalföld ('Small Plain').

Kisalföld includes the flatlands (e.g. Szigetköz, Csallóköz) distributed by the Danube and its tributaries and the surrounding hilly country. Their economical and cultural developments are due to its favourable position and good soil. In the fertile land grain, on the sunny hillsides grapes and fruits have been grown. Owing to the waters rich in animals fishing has also been important. Considerable animal husbandry and dairy farming was based upon the haymaking in the pastures of the river flats. As a consequence of good transport and market possibilities (Vienna, Bratislava) it became the north-western trade port of the Carpathian Basin and this greatly affected folk culture. Lots of industrial and imported goods pervaded the traditional, e.g. those of clothing and farming. Farmers producing for the market - following the examples of the manors at Magyaróvár, Fertőd and Nagycenk - were open to innovations. Thanks to the products of the local Bokor and Kühne Engine Works automation of agricultural works became possible quite early. But not all the regions of Kisalföld developed with the same intensity. Isolated areas with less fertile soil or devastated by the Turks in the eastern half of Kisalföld remained archaic in their way of life and architecture for quite a long time. Water regulation and drainage of Hanság was carried out only in the 19-20th centuries.

Since the 10-11th centuries Kisalföld was one of the largest territories inhabited solely by Hungarians. Since the 13th century ethnical diversity resulted from the German settlers, followed later by the Turkish-driven Croatians. German settling also occurred in the 18th century, changing the composition of population. Most of the people are Roman Catholic but the proportion of Lutherans is also significant.

Count István Széchenyi, "the greatest Hungarian" was born at Nagycenk, in the vicinity of Győr. The Benedictine Abbey at Pannonhalma and the Fertő environs are parts of World's Heritage. Kisalföld is famous for verbunk, the group dance of men.