Museum tickets, service costs:
First of all we can trace back the history of building the chains bridge through contemporary documents. The huge model demonstrating even the smallest details of the bridge, and the silver tool used at the laying of the foundation stone make the exhibition especially interesting. 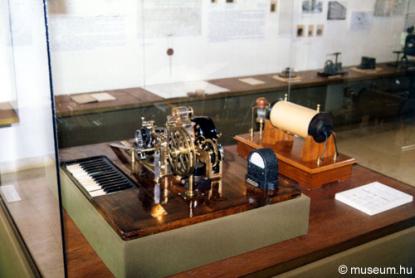 The last century train model placed in the middle of the first room ("La Victorieuse") and the objects placed in the showcase represent the development of the 19th century traffic. We can also see the theoretical work written by Széchenyi on this subject. A map appendix involve the sketch of the railway and road network of the country.

In the former visitor hall of the mansion we can see the model of the Széchenyi train found in the Óbuda Ship Factory. The documents and objects of the show cases tell us about the regulating work of the river Danube.

A 19th century map of Hungary well represent the need for river control. The strenuous work against the destroying floods and the harnessing of the Tisza was finished only by the end of the century. The model of the "Kisfaludy" steam engine and the time tables represent the beginning of steam sailing.

Széchenyi was young when he turned toward horse breeding. His experiences in England made him establish modern animal husbandry in Hungary. He had two studs in his family properties. He arranged horse racings, of which the colored stone drawings and the various prizes testify in the showcase.

Széchenyi established so called sample farming in his properties (for instance silkworm breeding). Qualified officers were helping him in this work.

The raw demonstrating the development of the 19th century technique does not only show us the changes made in the financial areas, but the intellectual capacity used by the Hungarian engeeniers for the sake of the worldwide development. In the first room we can see the engines and devices made by famous professionals as András Mechwart and Donát Bánki. The second room shows the works of engineers who became famous by their work pursued in the fields of electric supply or traffic: Déry - Bláthy - Zipernowszky's transformator, Ányos Jedlik's works, the telephone center of Tivadar Puskás and Kálmán Kandó's electric train contributed much to the technical revolution of the 20th century.