Museum tickets, service costs:
In the hall of the baroque mansion in Nagytétény an exhibition connected to Christmas relics is opened. Besides the old Christmas tree ornaments and candlesticks, pictures of saints, paper Bethlehem, Christmas greeting cards, envelops and boxes - from between 1870-940 - are exhibited. And this is all from the collection of the Applied Art Museum of Budapest. 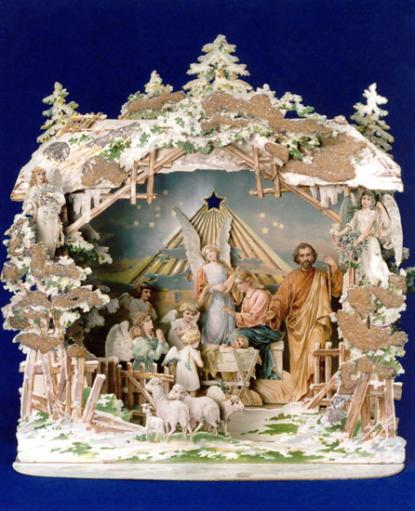 Do we ever think of when the first Christmas tree was erected and what symbols this celebration has? The former Roman Saturnalias turned into the magnificent feast of the Savior of Bethlehem. Jesus has brought the ancient gospel of humane love.

The barn of Bethlehem and the Christmas tree is tightly connected to the celebration. The custom of erecting the tree is of German origin: Martin Luther himself thought it important to erect the tree. Sebastian Brant: Narrenschiff at the end of the 15th century remembered the first Christmas tree erected in Strasbourg. The first picture (engraving) of a tree ornamented by stars and candles were made in 1509.

The apple reminds us of the Paradise, and the paradise-like character of Christmas. Its place later was filled by the endless globes as symbols of eternity. Their forms expressing perfection. Walnut is a symbol of Christ. Its green peel refers to the biter suffering of Christ, its seed refers to the divinity of Christ. The star placed on the top of the tree recalls the wonder of the Bethlehem star.

From Germany the Christmas tree spread over the whole of Europe. In Hungary it was the protestant mother of Frigyes Podmaniczky who first introduced the custom here, too. (Erzsébet Nostitz /1788-1853/). However, it might not have been the first one, for Teréz Brunswick, the founder of the first Hungarian kindergarten, and Dorottya Mária, wife of chief count Joseph Habsburg erected Christmas trees.

By the second half of the 19th century the Christmas tree became a pleasing custom of the middle class. Children were all happy about that. The toy industry produced numerous ornaments which were advertised in ads and newspapers.