Museum tickets, service costs:
The largest national treasure finds, the golden treasure from Nagyszéksós is to be presented by the Móra Ferenc Museum's new permanent exhibition. 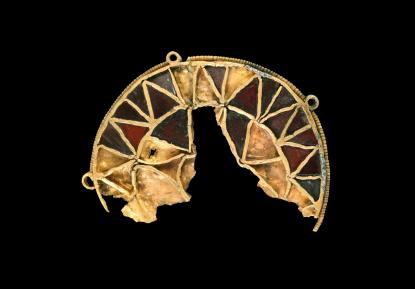 "Half a barrow" gold treasure was discovered in 1926 in Nagyszéksós in the vineyard owned by Mátyás Bálint that was unearthed by the then manager with the Móra Ferenc Museum. According to legend, gold had been found in the area, however, the children not knowing that it was gold, kept swapping those for pumpkins or apples among themselves. As it turned out: the gold was the largest ever Hun treasure of which about 150 objects weighing more than one kilogram of gold to date are owned by the Móra Ferenc Museum.

The Szeged based public collection is now showing the golden treasure found in Nagyszéksós in the framework of a permanent exhibition in addition to various gold coins and objects as well. These hundreds of exceptional gold artefacts have been kept in the museum safe up till, now, but from now on, beginning with the Museums' Autumn Nightthey will be on display at the exhibition 'Everything that is gold'.