Ticket prices
With the First World War a "bloody" twentieth-century dawned on European history, and it was the world historical event in which propaganda played a major role. The total war required the support of the public, so countries at war paid attention to maintain the combative zeal among the patriotic population. 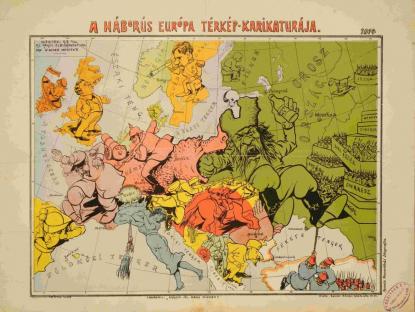 We are trying to find the answer to the question of how propaganda worked in the Monarchy in Hungary. What techniques they tried to maintain enthusiasm with? What media were used to do so one-hundred years ago? How everyday life of the people was pervaded by propaganda of various forms? What kind of image was conveyed about the war in contemporary media and it had to do with the reality of battlefield? And if there were was anyone, who dared to contradict the propaganda slogan?

Before World War II Hungary, the means of mass communication were only present in trade (eg advertising). The war changed this situation, influence on public opinion became necessary. But in this war - unlike the Second World War - government managed well devised propaganda activities were not present yet.. Propaganda, even though managed from various centres still permeated private life and public spaces as well.

Patriotic and bellicose messages without central management flooded everyday life; propaganda manifested through numerous household objects or advertising. The exhibition summons everyday life permeated by patriotic war messages, including kitchen devices, children's toys, we recall the cult of the royal family, and we will also show various forms of mocking the enemy.

As a key propaganda tool, the media that comes to the front. During wartime, they heavily influenced what and how was communicated to the people. The exhibition reveals how administration and censorship worked those days. The newspaper headquarters staff were included artists who worked as as correspondents artists. We show some of their works they did during the war. These are to be seen at the military exhibitions, among which the most visible spectacular is an original one.

However, propaganda did not only enter the public mind through military exhibitions but also by nail sculptures that functioned as .taking such monuments od interactive public sculptures. At our exhibition every visitor may angle a nail himself into an 'iron soldier". The statue angling served as fund-raising campaigns in order to which a variety of actions were organized. The military loans, mutual funds, commodity-raising campaigns are recalled via spectacular posters.

A separate unit is devoted to intellectuals, figures of literary, theatre and café life, who were not affected by the bellicose rhetoric or patriotic propaganda, and declared even at the beginning of the war that is was a pointless bloodshed. Visitors can also see a curiosities as the original manuscripts of anti-war poems by Babits.

We also present the coronation of Charles IV, wartime beer adds, Christmas postcards mocking the enemy, and also some wartime drawings by János Vaszary and László Mednyánszky. You can enter a pavilion similar to a Tatar kiosk, which this time is full of war propaganda posters.