The discrepancy between civilian and military claims for setting up the memorial resulted in new debates during the 1930s. 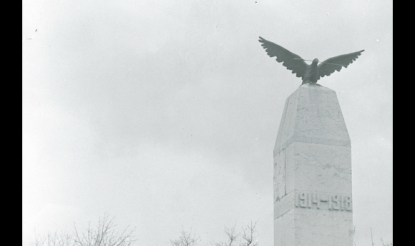 Some wanted only a single statue, others insisted on a triumphal obelisk. Civilians preferred a public memorial site, while soldiers planned a hall of fame. The standoff was resumed at the beginning of 1933, when the idea of building a gate by the castle entrance emerged. The solution was offered by Imre Lengyel, the representative of Rákóczi Square tradesmen and house-owners. Endre Pósa, another house-owner, persuaded the chairman of the committee to follow the example of Kőszeg, as they had built a gate to commemorate the 400th anniversary of the castle’s defence against the Ottoman army.

The new plan was most supported by downtown residents, who preferred the undisturbed weekly markets to noisy military parades. Obviously, the officer corps of the garrison and the companion-in-arms fraternity of 31th Veszprém infantry regiment were the chief opponents of the plan. On their opinion, it differed from the initial purpose of establishing a solemn site for events reinforcing fraternal solidarity. They kept on sticking to the idea of an obelisk set up in a spacious area.

Finally, the city council took a rather diplomatic decision: on February 8 in 1933 both options were voted.
All this happened in the shadow of the impending war.