Hussars are pride are also the trademark of Hungarian military. The permanent exhibition shows in a unique manner through the Nádasdy Hussars, the longest cavalry regiment of hussars, centuries of history of the well-known Hungarian army in Europe and even in America, with their outstanding performances. 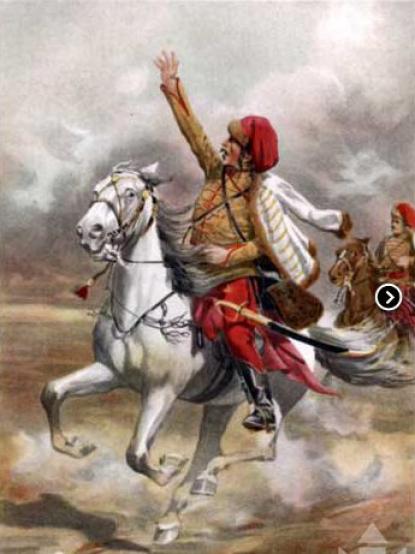 The Nádasdy Ferenc Museum presented Hussar Exhibition reviews the history of the most Hungarian branch, outstanding characters, weapons and uniform. The basis of our exhibition was laid off in 1983, when the Nádasdy hussar regiment officer corps donated to the museum former officer in the canteen equipment originally located in Sopron. After the donation, other members of the hussar regiment, as well as their descendants donated a number of objects and documents to the museum, which helped the museum to create an exhibition that reviews the history of the light cavalry. The Military History Museum in Budapest rent some items and equipment as well.

During the sixteenth and seventeenth. century hussars, especially light cavalry proved their bravery , the in battles in Hungary. They were rarely hired by foreign armies, and rather became a bodyguard in of the the King of Hungary. However, in fights against the Turkish they could prove their courage, their tactical sense day by day. Their duties included disturbance of the enemy's supply lines, espionage, in battle to protect the wings, and also from obtaining information about the military positions of the opposing army. Because of their ease of mobility, these tasks were easily fulfilled. The foundation of the Nádasdy hussar regiment fits in the regularization that began at the end of the 17th century. I. Holy Roman Emperor Leopold, King of Hungary, commissioned Ádám Czobor to organize two cavalry regiments. He became the owner of one regiments t,he other regiment went to János Pálffy, who was replaced by László Ebergényi in 1700. Both regiments owners were talented military leaders loyal to the court. Pálffy was Palatine in Hungary during the reign of Mary Teresa. László Ebergényi was a military judge in the Nádasdy Regiment. Later, as a as a captain he distinguished himself in the wars against the Turks. During the time of Rákóczi war of independence, he was engaged in activities to establish peace on the side of the emperor. After his death, the general György Csáky became the new owner of the regiment in 1724. The regiment distinguished itself those days in the Balkans, in fights against the Turks. From 1741 the count Ferenc Nádasdy served as an owner until 1783. In the regiment stopped Frederick II's advancing Prussian army at Kolin, near Prague, in 1757 led by András Hadik. The Empress introduced the Military Order of Maria Theresa to commemorate the battle and courageous recovery to appreciate the outstanding deeds of war. The first Hungarian who received the order was Ferenc Nádasdy. From 1888-the Marshal Ferenc Nadasdy, the hero of the battle of Kolin became the perpetual owner of the Hussars regiment. When we say today: The Nádasdy Hussar Regiment survived centuries, brought glory not only to the soldiers serving in it, but also to Hungary.

The permanent exhibition follows the history of Hussar weapons. The main weapon of most Hungarian branches was the spear in the early period, which can be studied in the hall of the museum ceiling frescoes as well. However, Hussars are associated with the sabre, which is the true companion of Hussars just like their his horse. Lajos Sárvári, the arms collector who lives in the USA has in his will that both original and copies items should be given over to the Nádasdy Ferenc Museum's sabre collection. The development of the most common weapon of hussars in the XVII-XX. century can easily be studied by way of the exhibits. It is observed during our visit to the museum, that the curved back-end gripped items were originally characteristic features of Persian and Turkish sabres. During fights the cuts and hits could be so strong that the the weapon could easily slip from the hand. The sabre was tied to the wrist by way of a string that came through a hole in a part of that leaned back. The string in the Hussar sabre was replaced with a button on the grip that no longer allow the slipping of the arms out of hand.

During WWI, the Hussar regime fought in Russia, Italy in a number of battles. Portraits of the heroes who had served in the Regiment was made in 1931, commissioned by the army cavalry Hussar regiment in Sopron. The battles of World War I clearly pointed out that the old, classic horse cavalry attacks' time was over. Their place was taken over by contemporary modern fire fighting arms. It was a characteristic scene when at Limanova in Poland where the Nádasdy hussar regiment soldiers heroically repelled the Russian army, the hussars left their horses and fought their enemies bare handed . OttmárMuhr , the regimental commander did not die of sabre cuts but died a hero's death by twelve bullets.

Between the two world wars, the greatest results in equestrian sports were due to former members of the hussar regiment. The greatest achievements came from one of the members of the 3. Nádasdy-Hussar regiment reached, József Platthy , who won the 1936 Olympics' showjumping with the horse named Sellő owned by Gyula Gömbös. That has been the best achievement by Hungarian horse riders at Olympics up today. Ottmár Schaurek was also a prominent figure in the equestrian sport, who won numerous awards in the second and third decade of the last century.

It is worth recalling a section form the Code of Cavalry Practice, which succinctly describes the expectations, which had to be meet not only by the cavalry officers, but also the general hussars: "The man who is brave-hearted in addition to having a benevolent nature is permeated by riding spirit, who loves and cares more for his horse than himself, who trusts his weapon and himself, who makes a brave decision even in the most critical situations and manages to follow it through. A man like this does not find anything impossible, his main element is attack and even during retreat he seeks the opportunity to fight back in favourable conditions ".