Ferenc Chiovini was born on 16 November 1899 in Besenyszög. The house he was born in had been the home of the village notary formerly, located in the park now named after him. The building itself was taken down, but the photos we still have of it are now on the walls of the memorial room. 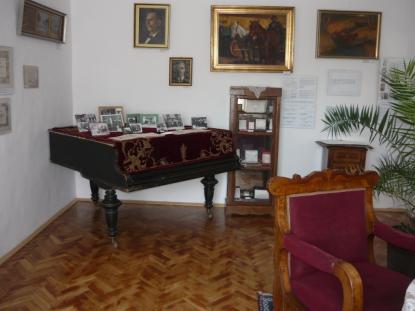 The Chiovini family originates from Italy. The great grandfather of the painter Chiovini was a soldier in Eger at the end of the 1700s. He fell in love with the town and moved there. One of his descendants moved to the Great Plain after the War of Independence of 1848. He was Ferenc Chiovini's grandfather. According to family chronicles, many of Ferenc Chiovini’s ancestors had artistic veins. His great grandfather used to be a goldsmith, but there were painters, violin artists in the family, too. Ferenc Chiovini sr. was the notary of Besenyeszög for 34 years.

Ferenc Chiovini' first memories were of the villagers living in hardship. These early memories effected his entire life and determined his approach to art. 'From the end of the garden in Besenyeszög one could see as far as the horizon' he wrote in his memoirs.

At a young age once he travelled to Szolnok with his father, and they passed through the artist colony in the town. He was deeply influenced by the experience. Chiovini was still a young boy who enjoyed drawing. At the age of 14 he made an aquarelle that is now on show above the piano in the memorial room. The drawing was about the notary home. Even the cover on the piano which is there now can be observed in the drawing.

The family moved to Tiszapüspöki in 1914 but Chiovini remained faithful to the village of Besenyszög to the end of his life.

At school his art teacher was Gyula Ruszti whose three-legged painter chair was inherited by Chiovini after Ruszti's death. The chair is also on show in the memorial room.

The notebook he carried with him while he was a soldier is full of drawings of the front, military horses and the daily life of the barracks. Chiovini graduated from the Verseghy Grammar School in Szolnok and began collage in 1919. He painted the fire in the village in 1925, the painting was entitled (Fire in the Village) with which his dream came true: he was accepted to the Colony of Artists as a quest artist.

His first paintings were realistic works of art: the details were worked out in academic style. After escaping studio work he was enchanted by working in nature and turned to plein art. The core of both impressionism and plein art is the same. The most important factor is the effect of air on colours, the play of light on the ground and in air, grasping the mood of the various time of day.

In the 30s Chiovini used tempera instead of oil due to the difficult financial crisis. The technique, however, effects the style. The works he did those days can be characterised with decorative colorism, meaning powerful colours. (Girl with Red Chawl). Ferenc Chiovini received a great number of commissions those days, many of which were religious in terms of topic. One of his great commissions was painting frescoes in Jászszentandrás together with Aba-Novák. The success of this works brought him scholarship at the Academy in Rome. During the days he spent in Rome he painted the streets of Rome, the Mediterranean environment. And Roman culture e.g. (Roman Self-Portrait). He was so successful that even Victor Emmanuel III King of Italy visited his studio.

He tried to escape military service with fake documents. Many times he hid in his friends’ home, one of whom was Zoltán Borbereki Kovács. The artist colony was completely damaged during the air attacks. After the war, Chiovini was hired to manage the reconstruction of the colony.

From the 1950s he was on political black list as Ferenc Chiovini did not follow the new trends in politics. He was offered less and less opportunity to show. But he continued to paint his favourite topics: the Great Plain, people who lived there and animals. He got involved in teaching both children and adults. In 1966 he received the Munkácsy Prize, in 1974 he received the medal Merited Artist of the Hungarian Republic.

He continued painting Besenyeszög and the outskirts of Szolnok until the last years of his life. These paintings were magical. The last years brought ripe and pure art by the painter Ferenc Chiovini.

He died in 1981 and was buried in the cemetery in Szolnok.