Museum tickets, service costs:
The organisms of a natural habitat live in reproductional communities, called populations. One criterium of their existence is the network of interdependent relationships between them. Populations are both parts of, and dependent on, a higher organisational layer: natural associations. Our exhibition aims to introduce this system of relationships in order to help the understanding of our marvellously varied flora and fauna. 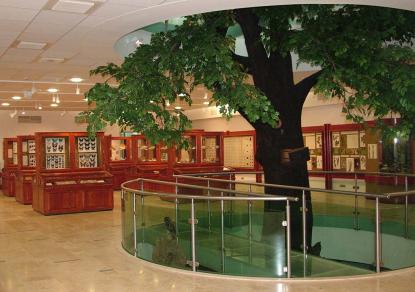 Soil and Root-layer: The lowest of the vertical layers of vegetation is the root. The layer of the roots extends from the upper organic soil horizon to the deepest growing roots. Soil life is a collective term for all the organisms living within the soil. Soil life includes protozoa, bacteria, fungi, algae, roundworms, rotifers, water bears, springtails, mites, centipedes, insects, snails and vertebrates. Some animals live on the surface, but make underground homes.

The Ground and Shrub Layer: The ground layer is at the bottom of woodland associations. Fungi, mosses, lichens and herbs live there. The primary producers - plants - of the ground layer provide food for the consumers (animals).

The diverse animal community of the ground layer mainly consists of insects. The appearance of these animals is determined by the vegetation. Bugs, cicadas, butterflies and their caterpillars, and also snails are quite common there.

The shrub layer can be found above the ground layer. It is the middle layer of the woodland. The shrub layer gives home to many insect species: caterpillars feeding on leaves, beetles eating pollen, bugs and cicadas sucking the sap from plants, and some invertebrates hunting for them.

The Canopy: The uppermost layer of woodland associations is the canopy. The different tree species of a woodland community often form sublayers within the canopy. One of the most common tree associations in Hungary is the Turkey Oak - Sessile Oak forest. These two dominant species form the canopy layer, and the sublayers provide home for different fauna.

The characteristic inhabitants of the canopy layer in Hungary are the birds and insects.