Both families gave a lot of artists to the histoty of arts. The three brothers, Sándor, Zsigmond and András lived in different places, so the impulses which affected them differed as well. 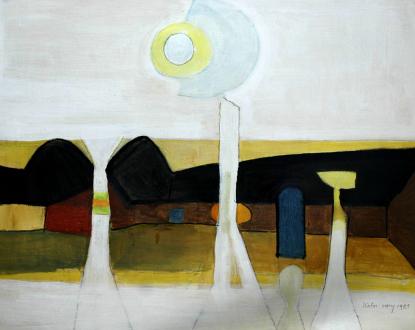 Sándor stayed in Paris for a long time (1896-1944), his family is linked to Békéscsaba through his marriage with Ilona Tevan. He worked as a graphic mainly. Zsigmond (1897-1980) became the best known among the three brothers who made his career in Paris. After an expressionistic start, he created his works in non-figurative style, however the sentiment of his brush-work remained till the very end. We have the least information about the life-work of András (1913-2000) for the present. A relation of picture building can be recognized on the works of András and Zsigmond which is due to the abstraction primarily.

The sons of Sándor, György and Pál were both born in Békéscsaba. The work of the three artists are connected through the frequent depiction of human figure. György (1919-19..) worked as a graphic. Mostly making of advertising graphic designs makes up his oeuvre. His brother, Pál (1921-1995) does not have any works without human figure. We can see the human figure again and again in pencil, pen, paint, on engravings, foils and represented with the technique of montage-like picture building which he really enjoyed. The second wife of Pál Kolozsváry, Éva Kolozsváry Stupler worked on assamblages rooted in surrealism which are full with philosophical thoughts and playfulness.

The Tevan family has a connection with Békéscsaba from an earlier date, in the first years of the 20th century Adolf Tevan (1854-1921) opened his printing company here in Békéscsaba. Many of his children became artists. We have received some characteristic and valuable works from the inheritance of Margit (1901-1978) the renowned applied artist, who moved to Budapest, and of István Engel Tevan (1936-1996) her son, a graphic artist.

At the two Tevans we can recognize such a creative closeness and artistic relation, apart from the real kinship, as if they were working in the same artistic area, Also in their work the human figure is of great importance, beyond their figurativeness, their lyric, humanity and gentle elaboration are the links between them.