Museum tickets, service costs:
The first time the chance to form a school chapel during the history of the 100-year-old town occurred in the 1920s. On Sundays, the desks were taken out of the sole schoolroom in the village, by then a municipality. Then, the schoolroom was refurnished with equipment from the chapel. One of the exhibition rooms shows original items from the chapel. The visitors can see the original tabernacle, the stoop, as well as a number of statues and flags. 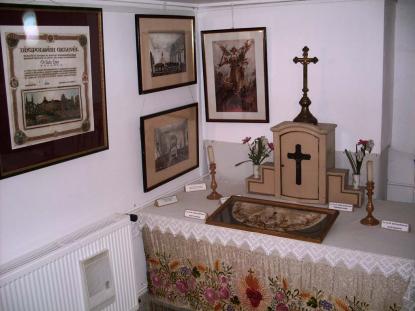 The second school chapel was formed in 1930 in the gym of the six-schoolroom school. We show this chapel in photos, but the visitors can see the original bell that was located in the school tower, too.

The solution to the issue of school chapel was the church finished by 1941. Photos of its consecration are shown on pageants. We also show a piece of the original altarpiece that survived WWII. The altarpiece was painted by Teréz Séd, who had been the student of Dr. Jenő Lechner. The cross that once hung in the assembly hall of the Town's Hall is displayed in the same room.

As births had been registered before the village parted from Budafok, we can show the register from 1819-1919. Photos of priests and ministers with names born in Albertfalva are also shown.

The archbishop and nuncio Dr. Lajos Kada moved to Albertfalva after retiring in Rome. The exhibition presents reminiscences he received during his life. He died in Albertfalva, but was awarded with honorary citizenship of the 11th district of Budapest posthumously. The visitors can also see the honorary document.