Museum tickets, service costs:
The opening of the exhibition took place in 2001 with the occasion of the 325 anniversary of the foundation of the printing house from Şumuleu Ciuc. 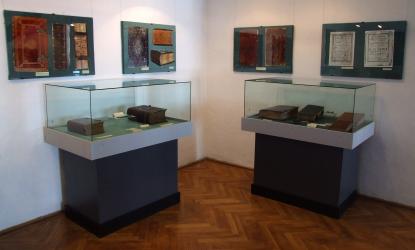 The printing house was founded during the principality of Mihály Apafi (1661 - 1690). At this time there were functioning eight other protestant printing houses (in Sárospatak, Cluj, Sibiu, Braşov, Alba Iulia, Sebeş, Keresd, Debrecen) but this was the first Catholic one in the principality. The biggest Catholic printing house of the country in that time was owned by the Jesuit University from Trnava (Nagyszombat), which was one of the most outstanding printing houses of the time thanks to the number of its prints and publications.

Until 1726 the printing house from Şumuleu was the only Catholic workshop in Transylvania. Its foundation and operation were in close relationship with the consolidation of the Catholicism and the spread of the Counter - Reformation. It was founded by the Franciscan János Kájoni, who obtained the necessary permission for the foundation from Rome. According to the letter of the Holy Congregation from the 22nd of June 1676 the Franciscans from Şumuleu had the right to publish the Latin grammar of Aelius Donatus and Emmanuel Alvarus, the family letters of Cicero and the reckoning table.

The first known publication that is important also from literary historical point of view is the Cantionale Catholicum hymn - book from 1676 edited by János Kájoni. This is a popular song collection that was used all over Transylvania and Moldova.

The book - binding workshop started to function at the beginning of the 17th century. The oldest cover is known form 1644 - 1650, made for Marcus Bandinus. The workshop was functioning from 1676 until the end of the 19th century together with the printing - house. The books that were published in the printing - house were all bound in the Franciscan book - binding workshop, but external orders were also carried out.

The covers from Şumuleu are usually decorated with gold tooling. In the 17th century the book covers were decorated in old - Renaissance style. At the beginning of the 18th century they went on with the old style, but from the middle of the century they started to decorate the covers in rococo - style. The 17th - 18th centuries represent the golden age of the workshop, which was followed by a decline in style and quality: the covers were made of cheap half - leather bindings or of paper.

Most probably the Franciscans operated the workshop until 1900. We know fifteen prints from the 17th century and eighty from the 18th century.

Our exhibition presents 125 prints and book – bindings: prints from 1676 - 1700, textbooks from the 18th - 19th centuries, the works of Franciscans, prayer - books, hymn - books, the publications of different kinds of religious societies, legal books, etc. You can also see some parts of the installation of the former publishing - house: the tools of the book - binding workshop, the copperplates of the illustrations and icons, etc.