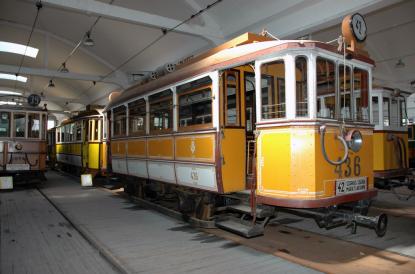 We are extremely proud of the BKVT 418 tram that represented Budapest's transportation at the Hungarian Cultural Season in Paris in 2001. We are also proud of the BHÉV Haraszti 4 Steam Engine Both vehicles are 120 years old this year.

A BHÉV 27 Steam Engine is also part of our compilation. It won its category at a Middle European Engine Grand Prix in 2005.

The BVVV 436 tram is not always in the museum since it is often parked in the shed.

The ACsEV M297 from Arad Csanád and the P459 trailer are of special interest.

Ikarus buses significantly changed transportation in Budapest in the 1960-70's. We also show an Ikarus 180 bus and a ZIU-5D trolley bus imported from Russia.

The last vehicle we show is a UV tram that retired after 50 year of service.

Other vehicles, engines etc can be seen at the open air exhibition.