Museum tickets, service costs:
The first ward introduces rail transportation in Budapest from the first opening of the horse trains in 1866 until the metros. Several photos and drawings show the predecessors of BKV. There are photos of almost all vehicles that were operated in Budapest. Picture of the 120-year-old HÉV in Lőrinc is also shown. 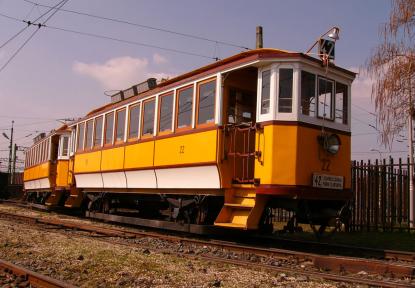 A portrait of the 'Iron Minister' Baross Gábor welcomes the visitors at the entrance.

A separate pageant remembers the Clog of Budavár opened on 2 March 1870. It was the 'dream of Széchenyi Ödön, the son of the count Széchenyi István.

The first tram is displayed in the ward, as well as the scale model the coach of the Millennium Train and two smaller models: the HÉV station of Törökőr by Bajcsy Géza and the 1:87 proportion model of a 40 tram made for the 50th anniversary by Németh Géza. We also show the coat-of-arms of the CEO of Electric Train Company of Budapest, Balász Mór.