Museum tickets, service costs:
It was probably his interest in modern art that tuned Pató Imre towards tribal art. Most of the compilation contains artworks from Africa, mainly from West Sudan, the Atlantic coast, Nigeria, Cameron and people from Congo. 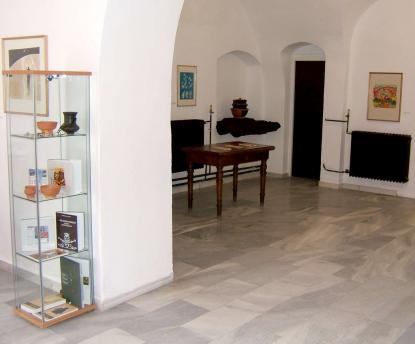 Typical pieces are masques, enigmatic fertility statues of the Dogon people, the antelope figures of the Bambara tribe, wood-carved masques of the Yoruba people, games of the Mankala, percussions and horns from Cameron etc. Bronze casting and a surprising representation of an urn cover mirror high art of the old Atlantic coast.

Clay statues of the Falassa, Ethiopians of Jewish religion, are of special value, as well as the stylized statues of the Makonde tribe from East Africa. These connect to Vincent Kofi's artwork entitled 'Waking Africa'.

The art of Australia and Oceania are also represented by a few objects. A giant orator seat from Papua New Guinea is the first that draw the attention. Next to it a carving from New Ireland conjures up the memoirs of predecessors. A dance mace from Santa-Cruz is used at manhood rites of passages. The art of aboriginals is represented by four crust paintings with spirits, totem figures and with periods of the growing of the Yam root.