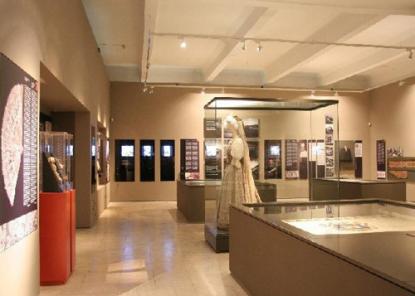 What does a museum represent? The objects "on its own right", the objects as a relic of a given community or an objects as an abstract symbol of community. And who represents the object? The collector, the author or the museologist? If we make it clear for ourselves that the museum needs imprint of social phenomena and not the sterile objects than these objects with strong personal relations can revive the institutions frozen by the elite and intellectuals by the 19-20th century. Our exhibition presents objects that represent themselves and revive their original owner.

Our intention was not to show a kind of fictitious history of the county but come up with objects that are from the county but are only part of our cultural heritage ever since they are in the museum. Most of these objects are not considered part of history in a historic sense. Many of them, mainly the archaeological finds but some of the ethnography objects, too, were only used in real life as tools and such are usually not considered anything important by the users. They spent thousands or hundreds of years in the soil or the attic, not alive in collective memory as long as the shovel of the archaeologist discovered them and the museum enlisted them in its collection. They are considered "historic objects" ever since the museum made them such. This change, however, deprived these objects from their own life.

Partly facing this process, our intention when organizing the exhibition was to give the "life" of the objects back. We would like to show the way an object is put into a collection where it revives, the original context it determines with its presence, what it meant in its original environment and what it means for us. Our aim is to place the objects back into their original "rights", a different kind of remembering so we can look at them as something ours.

Of course, it is difficult to redo relations of the objects. We do not reconstruct them in showcases and interiors but by giving all possible information on them. Part of this information is directly available, part of them are obtainable at the information desk as documents. Our intention was not to "write" the history of the object we ourselves but to help the visitors "envision" it themselves. We provide a short and necessary info on the objects, but those who want to know more can do so by choosing from the offered documents.

We do not want the objects to be kind of illustrations of a given era or to recall weekdays but based on their own history. Of course, some of the objects can be a symbolic representation of its own story or a historic event. Relics of the War of Independence of 1848/49, the inaguration of the Flag in 1944, pictures of the deportation of Jews from Veszprém County, documents from 1956 are symbolic in a collective sense, too. They are able to revive a larger scale dimension, too. Even though we did not mention 1848, 1944 or 1956 in a greater sense, individual objects give some information on these dates.