Museum tickets, service costs:
A number of guilds operated in the county town when it began to flourish. The most significant of them was the guild of baize makers. Nevertheless, potter and water miller guilds were also famous. 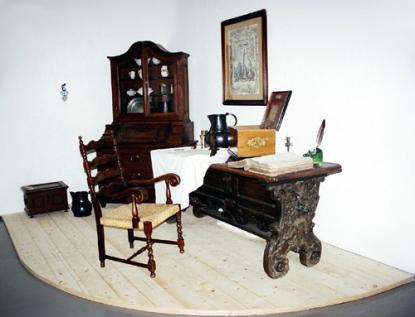 The exhibition presents memoirs of the operation of the body of guilds: guild chests, jugs etc. A uniform interior presents the memoirs of the shoemaker guild with all the tools of a convivial gathering. We show the open guild chess, the seal, cups, pot belonging to the guild. There is a masterpiece made by an apprentice set to be inaugurated master, a little pair of boots. Next to the interior we show a freshly restored flag of the shoemaker guild of Tata.