Museum tickets, service costs:
The town of Debrecen has a rich past concerning industry. The most successful of them were those who were involved in agriculture, the main interest of the people. The branches that specialized on the processing of the skin of leather were among the first ones since the raw material could be processed in a number of ways. 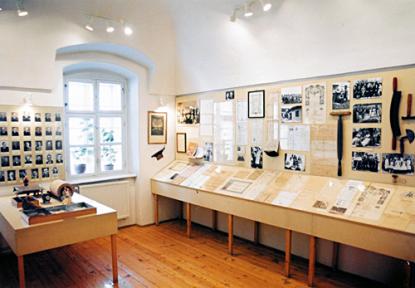 The tanners have been among the masters processing skin for centuries. At the beginning they only made shoes, but from the 16th century they were only involved with processing leather.

The yards of the district where tanners lived in Debrecen was the area surrounded by the Mihály Street, Tímár Street, Teleki Street. This area was intact until the end of the 1970`s when the houses were taken down due to the new town planning. Only one house was saved in Nagy Gál István Street, which is by now the only historic monument of our town.

The Tanner House is under the management of the Cultural Center of Debrecen. Originality and traditions are very important perspective in managing the museum, as well as the education of the people about trades once present in town.

When the character of the house was decided, the above mentioned points were kept in view.

Above all, the front of the building where the room of the apprentices was (Sárga István, Fazekas László) was saved in its original state. It is the location of documents and objects of the Déri Museum. The exhibition wishes to honor of the tanners of Debrecen.