Museum tickets, service costs:
The 40 posters at the entrance and exit mainly describe the bauxite mining in Hungary but also talk about aluminium, oxide and bauxite mining in France. A whole chapter is about bauxite mining that began in Gánt in 1926 and became a very important factor in European industry soon. 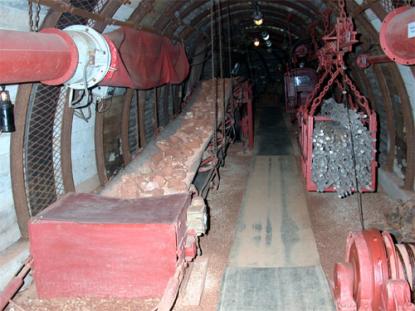 Tools and equipments used in mining can be studied in the mine model that shows mining circumstances under the earth. The simpliest versions of mechanic bauxite mining can also be seen, for example the MULTICAR van that was used for transport.

Mining fields built up of different safety systems complemented with machines do feel like a real mine. Visiting the 100ms long mine on 360 m2 is a real treat.

Bauxite mining began as a manual work. First the transport of the product mined out was machinized. The product that was moved out of the mine on mine cars was lifted on steam engines and moved on afterwards. The original cabin, mine car, steam engine can be seen on rails. A newest version of the electric engine can also be seen.

Besides the engines used for transporting people, the recoilers used to move material between levels are aslo displayed.