Museum tickets, service costs:
The exhibition in the Türr István Museum titled ‘Life on the Danube’ was first shown in 1984. Renewed, it is shown from 2001 under the same title. 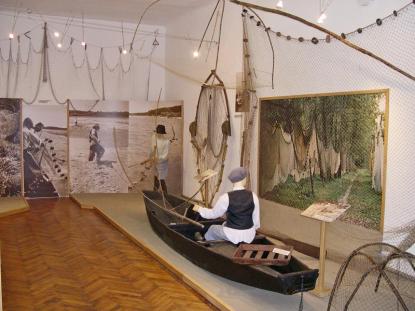 The organizers, Solymos Ede and Merk Zsuzsa kept to the concept of the old exhibition focusing on the lifestyle of fishermen, seaman and tradesmen. When organizing, they aimed at minimal change of essence and making the display more enjoyable with installations.

When entering, the visitors first see the land around Baja in the 18th century on a map by the Italian man Marsigli. The material is placed on both sides of a long ward. The first thematic unit presents the procession of fish. Fish was first moved to boats, then to barks tied to boats. Until they were sold, they were kept in positioned barks.

Shipwrights living around Baja were called 'super’. They built ships based on experience and not according to designs. The next unit shows their tools and their work. Ships used for the transportation of crop had ornamented bows. After the ships were removed from usage, the shipwrights often put the bows down in front of their houses as the sign of their business. One of these bows commemorates the seamen of the Danube.

The fishermen inn is furnished like an interior. A fisherman stands in front cooking fish soup in a cauldron. An interesting tool, a so-called ‘shell comb’ stands in the corner of the house. It was used for ‘combing’ the bottom of shallow water from where shell was removed. Shell was used for making bottoms.

A net stands next to the homestead. The exhibition is abundant in special tools used by fishermen.

The main trade in Baja in the 18-19th century was trade. Water mills were placed on the Danube. We also show the scale model of a ship mill.

Signs of miller and fisher guilds recall the old companies along with their guild boxes and seals. The protector of fishermen, Saint John is also represnetd in this unit. The first chapel in his honor was built in the 1760’s.

We also show stuffed fish. One of the favorite of the visitors is 9 meters long and was probably hundreds of kilos. Caviar was gained of it while its bladder was used for wine defecation.