Museum tickets, service costs:
The southern wing apartment of the Palace, which Antal Grassalkovich I rendered at the disposal of his friend, Count Kristóf Migazzi, Bishop of Vác and Cardinal Archbishop of Vienna, was converted into a theatre by Prince Antal Grassalkovich II between 1782 and 1785. The Palace theatre was opened earlier than the Castle Theatre that the Buda Carmelite church was converted into at the instigation of Farkas Kempelen in 1787. Thus the palace Theatre is the oldest operating stone theatre in the country. 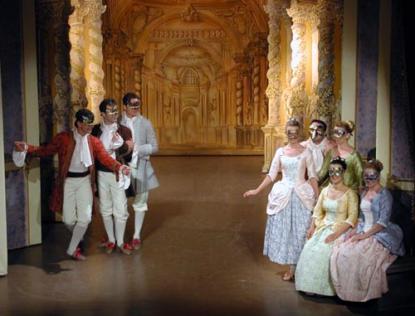 The baroque theatre, which has seating facilities for 100 guests, operated on a temporary basis, and performances were held only when the prince’s court was in residence in Gödöllő. Companies from Buda, Pest and occasionally from Győr performed. Music was supplied by the permanent 24-member orchestra of the Prince.

The back wall was occupied by the chancel, and the circle was reserved for members of the prince’s family and officials of the household. There were two entrances to the auditorium, one opening into the garden, and the other was under the chancel. The orchestra was between the auditorium and the stage, so that the stage, which was one and a half meters higher, could easily be seen above the heads of the musicians. The inner walls are decorated with classic late-baroque wall paintings, which create the impression that the hall is larger than in reality.

The castle theatre ceased to exist in the course of the work carried out in the year of the Austro-Hungarian Compromise in 1867. At that time the theatre settings were auctioned together with many other furnishings.

The link-motion system theatre, which is unique in Hungary and considered very rare in Europe was opened up in the autumn of 1986. On completion of the renovations the opening performance was held on 8th August 2003 when the Hungarian State Opera House performed Händel’s Julius Caesar opera.