Museum tickets, service costs:
The exhibition has two separate parts: the architectural remains are on the side of the stairs of the ward; the pieces of the extremely rich collection of tombstones from Buda and other parts of the country represent the main types and the conformation of the motives of the tombstones of the different periods of the Middle Ages. 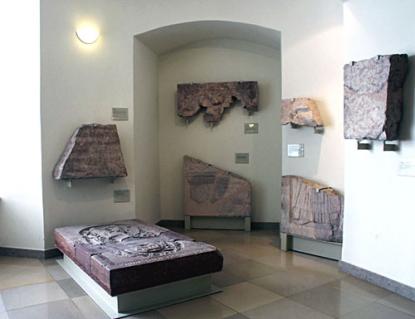 From the point of view of the history of museology the copy of the tympanum made in Vajdahunyad is significant. The pillar fragment found at the excavations at the Royal Cathedral in Székesfehérvár in 1862 is important among the archeological remains. The pillar from the Cathedral of Esztergom is a reminder of another important period of the researches of the Hungarian history of art and protection of monuments: the restorations in connection with the anniversary of Saint Stephen in 1938.

The tympanum ornamented with the blazon of Provost Miklós Györgyi Bodó is rejoicing. Since one of its two pieces was placed in the National Museum, the other in the National Gallery they could only be joined on a piece of paper for a long time. Fragments with data on them are also very interesting: two Turkish inscriptions revoke the fortification works of the walls of the fortresses in Buda and in Székesfehérvár.

The exhibition that took its selection from the collection of the museum introduces the visitors to the period 13th-17th century. The red marble tombstone at the beginning of the unit from the 13th century is the oldest in the collection of the National Museum. Its simply executed inscription was a typical rhymed epitaph of the Middle Ages throughout Europe at that period. (I am, what you will be, what you are, what I was myself, please say a prayer for me.)

The tombstones were usually erected by the rich, but they still revoke a diverse reality: from the tombstone of the noble country man, and that of the captain of Erzsébet Szilágyi to the fragment of the tombstone of the Viceroy of Croatia the visitors may get acquainted with the different types of noble tombstones. Tombstones of yeomen are also presented at the exhibition.